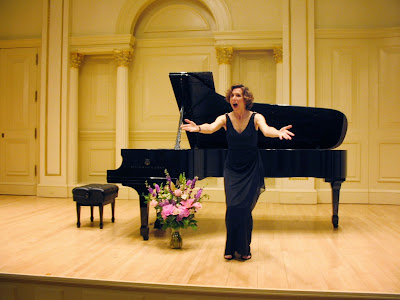 If I could have written what I was feeling in the moment on Sunday, May 7, 2006 at 2:00 p.m. on stage at Weill Hall at Carnegie Hall, it would have been “miraculously calm, relaxed, warm, happy and good.” It could only have been a miracle that brought me to that place, because the night before I was suffering from a severe head cold, runny nose, chills, sore throat, aching sinuses—you name it, I felt it.

I ended my evening early, filled up on Nyquil, Ibuprofen, and Cold-eze, and prepared for a good night’s sleep. But sleep did not come. Every hour, I looked at the clock and saw that another hour had passed. I wasn’t alert with worry about the day ahead of me, I was just miserable and couldn’t rest. I finally dozed off at 7:30 a.m., but woke up 45 minutes later because I was thirsty and starving. Alan, Delaney and I left Taylor sleeping and walked in the cold to the nearest diner. I went back alone to take a long, hot bath, and then it was show time. I dressed in my warmest clothes, packed my long black dress, shoes, programs, and everything else I needed for the concert, and stubbornly walked 10 blocks to get to Carnegie Hall.

Mom met me outside their hotel (just across the street from CH) and we headed for the stage door entrance. Celia, the assistant for the afternoon, led me to my dressing room (very nice and clean, with comfy chairs and a Steinway upright in the corner) and said she’d be back to let me on stage to warm up. Alan, his mom, and the kids arrived shortly after, and there was a mad rush to get everything in place—programs, Will Call tickets, CDs in reception area. I changed, put some extra makeup on for Henry (my hairdresser, whose advice to me was, “when you think you have enough makeup on, put on a little extra, just for me”) and came out on stage. I only had time to stretch my fingers a little, and then it was time for photos. While I was strutting and posing, I saw Jill, my sister-in-law, and did a double take. What is she doing here? And then more friends, Jackie, Mary Jane and Diedre. I got so choked up. They had been planning this surprise for months.

People were already starting to take their seats (it was well after 1:30) so I went back to the dressing room to wait. More makeup. Check hair. Go to the bathroom again. Wipe nose again. Check makeup again.

The stage manager, Dennis, set a music stand behind the piano for hiding a box of Kleenex in case I sneezed during the concert. The last thing I wanted was to play not so well and have people say, “well, she wasn’t at her best, but she was sick. I’m sure she was stressed out.”

Celia gave me the 5 minute call. 1:55 p.m. I didn’t feel sick. My nose wasn’t running. I wasn’t hot or cold—I felt just right. So many people said they would be thinking of me and pulling for me at this time, but I didn’t know the effect it would have on me. I reminded myself to let the words I chose for each piece put me in the right mood. (For “From Mozart to Me” it was “elegant”; for “Softly Spoken”—intense; “Rocktober”—rebellious.) And then it was time to go on.

I saw friends and family in the audience, and was so happy that they came. I saw strangers, which was a good thing. I looked for the seat that the reviewer I had been corresponding with (my Guffman) would have sat in. But it was empty. I smiled, bowed, sat and played.

It wasn’t a fog, but it did go by fast. I played 9 numbers, separated by stories about the music. The sound and the piano were such a relief to me. Rather than fighting and compensating for bad sounds, I could relax in the great sound that the piano made, and the wonderful acoustics. I could play so quietly and still be heard. I could play thunderously and it was still warm. Then it was 2:50 and time for intermission.

Whisked back on stage at 3:00, I finished out the program, playing eight more songs, and just feeling great. I played some pieces better than I had ever played them before. When it was time for “Adieu,” I was genuinely sad that it was over. I’m not ready to stop! I went off stage, and when I went back on, the audience was standing and applauding. I played “Searching” for an encore, and then it was over.

It wasn’t until we were on our way to Little Italy for dinner that the cold symptoms reappeared. I couldn’t taste my wonderful dinner very well, but my satisfaction in the performance left me full and warm.

By the way, my dad (who rarely misses a concert) said it was the best he had ever heard me play.