I wrote this a couple of months ago when I was feeling sorry for myself about who knows what, and decided to see if I could switch my thinking by writing about how lucky I am...

I am thankful for the piano that sits in my living room. Almost every piece of music I have written was at that thing. Over the past 20 years, so many kids (and adults) have touched it and made their own music.

It is the best toy in the world. It represents opportunity. It invites me to play and explore. It represents past, present and future. Songs can be coaxed out of it that remind us of our past, and worlds that have never been created before can be found by sitting and dreaming and pushing the keys.

I often want to “upgrade” to something bigger, blacker, brighter and shinier. But parting with it might be a little scary. What if I can’t write as well on something new?

I am thankful that I continue to be drawn, magnetized to this big plaything. And just when I think all the ideas are already thought of, a new one comes to me, just because I took time out of my day to play. 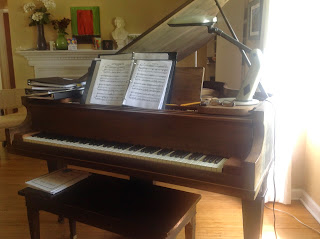 Posted by Unknown at 8:51 PM No comments:

I write stories to remind myself of moments when I did the right thing as a teacher, so (hopefully) I won’t blow it the next time.

Working with a 9-year-old at his piano lesson, I flipped through his book to find the next song to learn, while he poked around at the keys, letting his fingers land wherever they wanted. Playing two notes in each hand, he hit upon a very cool chord and began playing an interesting and complex rhythm, trading off between his hands. He kept it up for quite a while, with me still turning pages and thinking about what I should “teach” him. When I found a good song, I asked if he would like to hear me play it. I noticed that as I played, he wasn’t really listening. (Wow, that's never happened before!!) He was busy tapping his legs with the same rhythm he discovered earlier (obviously because he didn’t want to forget it.) Luckily, I stopped what I was doing, and had him play his idea again. "Can you teach it to me?" I asked. It was quite difficult for being basically a two-measure pattern, but he patiently stayed with me, breaking it down so I would understand it better.

When I finally had it down, I suggested he record himself playing, so that he could play along and come up with a melody over the rhythm. To demonstrate, I got him going on his rhythm again and I improvised with him, high on the keyboard. This went on pretty much until the end of the lesson – we were having so much fun. When his fingers finally tuckered out, I thanked him for teaching me his pattern, and said, “We made music today.” And he agreed.

Posted by Unknown at 7:30 PM No comments: